All Saints Parish was created on July 1, 2015 with the merger of two of Evansville’s oldest parishes: St. Anthony and St. Joseph. The histories of the two churches reveal the path we followed to arrive at this historic merger. 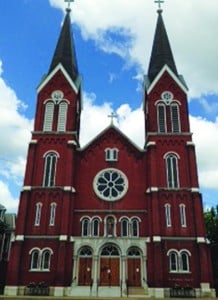 The long journey to become the All Saints Parish we are today began with the vision and benevolence of German immigrants Anthony Reis and his wife, Magdalena, who made their fortune in the tannery business beginning in 1857. In addition to fortune, Mr. Reis found a place in history as the inspiration for an early Catholic church in Evansville, Indiana.

In 1872, Mr. Reis built the current Saint Anthony rectory as a mansion for his family. The Reis home was located on the block bounded by First Avenue, Columbia Street, Second Avenue and Delaware Street. Mr. Reis died in 1884, and the next year his widow donated this parcel of land to the Indianapolis Diocese with the stipulation that the land be used as the site of a Catholic Church to be named in memory of her husband.

In 1888, Rev. Joseph Schuck, a 23 year-old native of Germany, became the first pastor and began plans for a school that would house a provisional church on the second floor. Within weeks, Father Schuck was forced to step down as pastor because of poor health and was replaced by Rev. Kasper Seiler.

While the church-school was being built, Mrs. Reis provided Father Seiler a temporary room in her home and offered the use of her attic for church services. On June 13, 1888, the Feast of Saint Anthony, the new parish celebrated its first Mass and continued to hold services in the attic for the next four months. On November 4, 1888, Mass was held for the first time in the new parish building.

The parish grew so rapidly that preparations soon began for the construction of a larger church, separate from the school. Brother Adrian O.S.F., a renowned architect from Saint Louis, was chosen to design the church.

On Pentecost Monday, May 25, 1896, the church was ready for its formal consecration. The ceremony began at 7 a.m. and was attended by more than 25 priests from Southern Indiana, Illinois and Kentucky. Members of Evansville’s Catholic parishes assembled at Holy Trinity Church and paraded to Saint Anthony to attend the Pontifical High Mass. The 290 families in the new parish pledged $17,000 for the new church, and donations from other parishes and pew rent (a payment for the right to sit in the same pew each Sunday) would help offset the remainder of the costs.

In 1888, the Sisters of St. Francis of Oldenburg, Indiana were called to conduct school. The Franciscans would represent the only religious order teaching at Saint Anthony until 1975. In 1927, enrollment at the school had grown to approximately 400 pupils and a new school and parish building was built and dedicated in June of 1932. Saint Anthony School continued to serve school families until 1987. That year due to declining enrollment, Saint Anthony School consolidated with St. Joseph School as Ascension Elementary School. One year later, Ascension School closed.

Today, Saint Anthony’s Church has been restored to its former splendor. The parishioners continue their mission to serve the poor in Evansville.  The former school is now known as the Center for Family Life, or CFL, and is home to the church cafeteria, gym, chapel, meeting rooms, and Parish Offices. 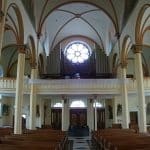 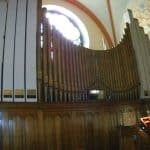 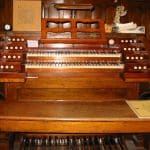 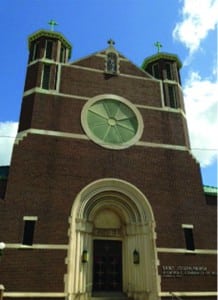 The first location for the celebration of Mass was a former grocery store located at 519 North Main Street. The diocese at the time owned property nearby that had been used for a cemetery and a portion of this land became the site for the parish. In 1906, under the direction of Father Patrick Rowan, construction on the Church/School building and the convent began. In the following year, 1907, the Benedictine Sisters of Ferdinand began a 79-year teaching relationship with Saint Joseph Parish.

In 1915, an addition to the Church/School made it a “double-decker”. The Church space was now on the top floor and classrooms were on the main floor and lower level. On May 20, 1923, the cornerstone of the “new” Saint Joseph Church was laid. The construction of the church was begun in 1923 and completed in 1924. The neo-Romanesque architecture, marked by its rounded arches and stately limestone columns, is unique to the churches of the city of Evansville. Francis Joseph Reitz contributed significantly to the new Church building to acquire the exquisite marble sanctuary furnishings. Italian artisans came to install all of the marble pieces and the mosaic of the “Death of Joseph” in the baldachin. On August 9, 1924 the altar was dedicated by Bishop Emmanuel B. Ledvina of Corpus Christi, Texas and on August 10, 1924, the Church building was dedicated by Bishop Chartrand.

In 1944 the Diocese of Evansville was formed, led by Bishop Henry J. Grimmelsman. In 1947 much of the northern section of the parish was set aside for the new parish of Saint Theresa. In 1954 the new school with 14 classrooms, gym and cafeteria was completed and dedicated. At this time, Magdalen Hildenbrand, the first lay-woman teacher in the Catholic elementary schools in Evansville, was hired.

Starting in 1953 and continuing on into1963 extensive remodeling was done in the church.

With the sale of the Assumption Cathedral in 1963 the church acquired part of its pipe organ and the large marble statue of St. Joseph.

In 1968 to conform to the new liturgical directives from Vatican II the front platform in the sanctuary was extended and a new granite front altar was erected. In 1981 the interior of the church was repainted, new carpeting and cry rooms installed and the marble cleaned. It was during this renovation that the small baldachin (the small marble canopy over the tabernacle) was accidentally knocked off its base. It crashed to and through the floor making a hole around 3 feet in diameter. Fortunately, The Marble Shop of Knoxville, Tennessee sent a representative to inspect the damage and on his next trip to Italy this man took with him a picture and the design. 14 months later the high altar with its baldachin was as good as new.