Congratulations to Mike & Gloria Niehaus and Bonnie Wink, All Saints Parish 2021 Bruté Society Nominees! Mike, Gloria and Bonnie were inducted into The Brute’ Society during a solemn Ceremony of Induction November 7th, 2021 at Saint Benedict Cathedral.

WHAT IS THE BRUTÉ SOCIETY?
The Bruté Society is an honorary association of southwestern Indiana Catholic lay persons who have been recognized by their fellow parishioners as outstanding models of Christian stewardship.

The Bruté Society was established in 1990 as an official activity of the Diocese of Evansville, Indiana.

ORIGIN OF THE NAME
The Bruté Society is named for Servant of God Bishop Simon Bruté who was appointed the first bishop of Vincennes in 1834 and was a great example of Catholic stewardship. At that time, the territory of the Vincennes Diocese included all of Indiana as well as about one third of Illinois. The name “The Bruté Society” represents the rich spiritual and historical heritage of the present Diocese of Evansville.

PURPOSE AND GOALS OF THE SOCIETY
The Bruté Society was established to accomplish several related purposes:
1. To acknowledge and give thanks to God for exemplary Catholic stewardship demonstrated by individual members of the parishes of the Diocese of Evansville.
2. To promote an ever-deepening commitment to stewardship as the way of life for all Catholics in southwestern Indiana.
3. To give public witness to the unity of all parishes of the Diocese of Evansville.
4. To provide an annual inspirational celebration for the Catholic Church in southwestern Indiana. 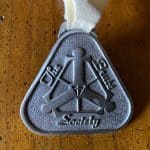 As a special symbol of membership in The Bruté Society, each member receives a beautiful, distinctive medallion known as the “Simon Bruté Medal.”
The ribbon from which this medal hangs is placed around the neck of new members by the bishop as part of the induction ceremony.
The Simon Bruté medal was fashioned from the official diocesan stewardship logo. This logo depicts the three stewardship “Ts” (Treasure, Time and Talent) presented in a way that looks like three people arrayed in a triangle. At the center stands the powerful symbol of the cross representing the core of the Christian Faith. The words “The Bruté Society” ring the inner design to symbolize that The Bruté Society members are, first and foremost, good stewards.